I just had a birthday (yesterday in fact) and have been reminiscing about past birthdays. Good ones and the not so good ones. Some funny and some not so funny. Here's one our family remembers very well.


When my sister, brother and I were little, our Mom always made our birthday parties special. Our grandmother, aunts, cousins, and friends were invited. She would have a bright paper tablecloth with matching napkins and cups on the dining room table. Mom would bake and decorate the cake herself. It wasn't fancy by today's standards―just an eight-inch round, two-layer, Betty Crocker cake mix.

﻿    Once all the games were played and the presents had been opened, we'd all march into the dining room and grab the nearest chair. Grandma and all the aunts were lined up along the wall. We would be waiting for the arrival of the cake. Mom had a very special cake topper she would bring out only on birthdays. It was a round, plastic, carousel-theme with horses affixed to the tent with string. On the back of the base was the wind-up key. When you turned the key the little horses would flair out over the cake. We would all sing the birthday song. The candles would be blown out, Mom would remove the cake topper, then cut and serve a piece to everyone.

The one item we I never saw at any other birthday party was the individual ice cream cups with their own wooden paddle spoon. Mom didn't just scoop ice cream from a carton and drop it on our plate next to a slice of cake. No-siree-Bob! Everyone had their very own ice cream cup! She would call out, “Who wants chocolate? Who wants vanilla?” I don't know how she understood everyone with different answers flying around the room. We would pull the cardboard lid off the top, and dig in with that wooden paddle spoon.


My fifth birthday was different. It was the one we would not forget and will talk about for years.


Everything was going like clockwork. Grandma, aunts, cousins and friends were here. The table was set, the ice cream cups were in the freezer, the cake was in the kitchen along with the cake topper.


After the games were played and presents opened we traipsed to the table. Lots of talking, laughing and joking around the room. Everyone had their ice cream cups and the cake was on the table. The candles were lit, the carousel was wound-up, whirling and twirling on top the cake. Everyone started singing, but before I could make a wish and blow out the candles, WHOOSH!! The cake topper caught fire. A flame went straight up and the cake topper melted into the cake.


Mom picked up the nearest paper cups and threw soda on the flames. Suddenly, the aunts were tossing different things on top of it to smother the fire. Smoke curled up toward the ceiling. The carousel horses had been swinging out and some actually flew into the candles. Several aunts grabbed kids and ran for the door. Others scattered to a nearby room.


Kids and adults were stunned as they stared at what was left of the pile of burnt, melted plastic, wet cake and liquified frosting. My major concern wasn't that my cake had caught fire, it was that I was having a birthday with no cake. I remember putting my finger into the frosting and wanting to taste it.


That was the end of our very special cake topper. We never had another one like it. The cakes mom continued to make were still the eight-inch round, two-layer, Betty Crocker cake mix; but now, she bought the peel and stick edible candy decorations that had candle holders and letters you could spell out Happy Birthday. They made the cake look fantastic.


Later birthday parties were not as exciting as a cake on fire, but they were fun just the same. Every once in a while, we'd reminisce about my fifth birthday “blow out!”
Posted by Gayle Ficarra Wolcott at 11:09 AM 1 comment:

February 9, 2014: 50th Anniversary of The Beatles on The Ed Sullivan Show

When I was growing up, most Sunday nights our family would gather in the living room at 8 pm in front of our black and white TV to watch The Ed Sullivan Show on CBS. He had a great variety show for the whole family. Ed would introduce the most popular artists in show business. From music, film, Broadway, opera, and comedy. When the space race was happening, Ed would sometimes have an astronaut stand up in the audience and take a bow.


My older sister, who was a freshman in high school, asked me if I was going to watch The Beatles on Ed Sullivan that night.


She clued me in, “They're a new, popular band from England. Their music is all over the radio. Everyone at school is talking about them.”


Since Dad had control of the TV, we told Mom and Dad we wanted to watch The Beatles on Ed Sullivan.
“Who are they? Are they bugs?” Dad asked.


My sister explained they were a new, popular band from England. Mom and Dad relented.

When Ed finally introduced The Beatles, the camera panned over to the band. Their first song they performed was “All My Loving.” The teenage girls in the audience squealed in delight at the sight of The Beatles. The squealing soon turned into screaming. They screamed throughout the entire song. We had never seen or heard anything like it before. The sounds, the reactions, the volume, it was overwhelming! I think we sat there with our mouths open. WOW!


I became an immediate fan. I wasn't quite a teenager, but I was caught up in the action. Mom and Dad's reactions weren't the same as ours. “That long hair! The noise!” Mom and Dad rolled their eyes and wanted to change the channel right then and there. “NO! They're going to sing two more times in the second half of the show! You can't change the channel now!” It took some convincing, but the channel stayed on CBS. 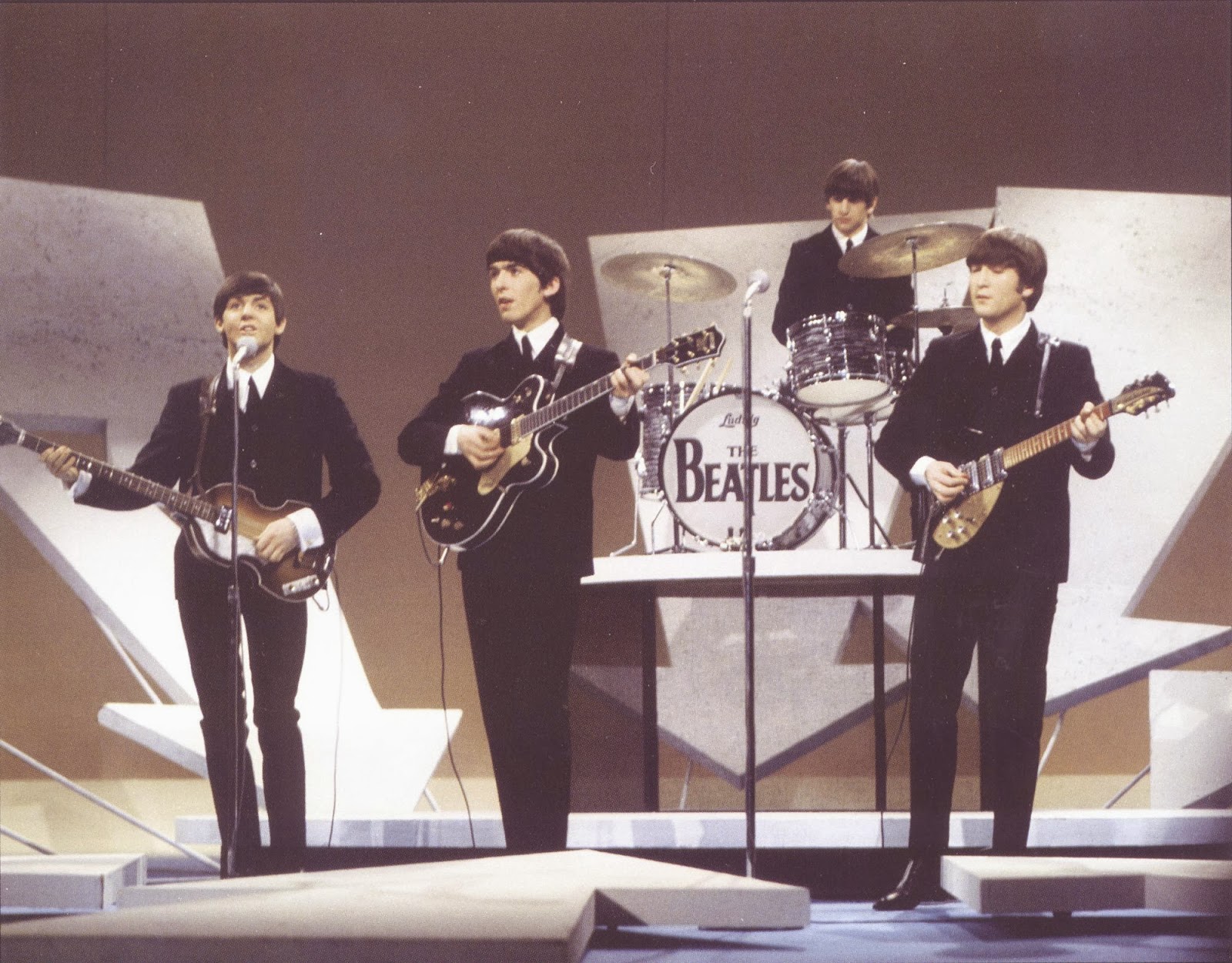 During their second song, “Till There Was You,” the camera individually cut away to John, Paul, George and Ringo and put their name on the screen, to help introduce them to America. Now we knew who they were. When Dad saw one of the Beatles was named George, he thought they were somehow all right. Dad's name is George too. For their final song, the Beatles performed “She Loves You.” It's still one of my all time favorites.


On August 12, 1966, The Beatles began their 14-date final tour with a concert at Chicago's International Amphitheater. They played two shows, at 3 pm and 7:30 pm, each of which was seen by 13,000 people. My girlfriend, Connie and I, had tickets for the 3 pm show. We wanted to be as close to the stage as we could. We paid $6.50 for the most expensive tickets.


The opening acts for the entire tour were The Remains, Bobby Hebb, The Cyrkle, and The Ronettes. The Beatles' standard set throughout the tour consisted of 11 songs: Rock And Roll Music, She's A Woman, If I Needed Someone, Day Tripper, Baby's In Black, I Feel Fine, Yesterday, I Wanna Be Your Man, Nowhere Man, Paperback Writer, and I'm Down. During the tour they occasionally substituted the final song with Long Tall Sally.


That 1966 show I attended when I was a teenager is still one of my fondest memories. I have bragging rights!

Posted by Gayle Ficarra Wolcott at 5:19 PM No comments:

Last night I was checking some facts in my genealogy program on my husband's family line. I hadn't worked on his line in some time. I had several alerts about dates that had problems. I (or someone who gave me the information) had a family member in the wrong family. The person in question was put into his grandparents family by mistake. No wonder his "mother" was 67 years old when he was born. Big red sign right there!

After all the children were linked with the correct parents, I noticed I hadn't put in any census information at all. I went over to Ancestry.com, logged in, and started looking through all the censuses starting from 1940.

Well, lo and behold, what do you know? It was like starting all over again; the thrill of the hunt. With many surname spelling variations, I was able to trace his mother's maternal line back through the 1900 U.S. population census in Pennsylvania. I found my husband's great-great-grandmother Helen, enumerated with her son John's family in the 1910 and 1920 censuses. Found a great-uncle George, in the 1900 census, enumerated with his brother John's family. Even hubby was impressed.

So far I've found my husband's mother's paternal line only through 1920 U.S. population census in Pennsylvania. Their surname also had many spelling variations. At one point there were over 3,000 results and all the filters I was using wasn't showing up. On the 1920 census his great-grandparents stated they immigrated here in 1901. I'm not giving up yet, I have many avenues to still search, and the hunt is exciting.
Posted by Gayle Ficarra Wolcott at 12:54 PM 1 comment: