I've attended SCGS Jamboree sessions off-and-on since 2001. I remember the different facilities where the event took place. I’ve enjoyed each and every year and this one is no exception.  I’m proud to say I’m a member of SCGS for most of those years.

The camaraderie between the speakers is a joy to watch. Most of them hadn't seen each other in the past year. They seem to pick up their friendship as if no time had passed. Whether they are sitting around small tables having coffee, tea or other favorite beverage or at a dining or banquet table together, laughing and joking like siblings. It's all part of the fun at Jamboree.

The Marriott hotel staff, from the front desk to housekeeping, porters and waiter/waitresses go out of their way to be helpful and friendly. I look forward to coming every year.

During Judy Russell's session, she did a shout-out to Ventura County Genealogical Society for coroner records on their website. (I'm also a member of VCGS.)

There was something for everyone!

Posted by Gayle Ficarra Wolcott at 10:08 PM No comments:

When my mother passed away in October 1997, she was living with my sister Sharon in Palmdale, California. She was only 70 years old. Dad had passed way in 1995. There were only three of us now; Sharon, our brother George and myself.

Sharon lived in a mobile home without a garage only a storage shed for seasonal items or “extra” stuff.  Before mom moved in, she had paired down her personal belongs and given away things she could no longer keep or store.

About a month after mom’s passing, the three of us worked around our schedules and finally met at Sharon’s house to sort out mom’s effects. We don’t live close to each other, so it was hard to get together at the same time.

We weren’t allowed to go into mom’s room unless she invited or asked us to get something for her. Walking into mom’s bedroom was surreal. She didn’t have much, mostly clothing and a few knick-knacks. Sharon started by opening closet doors and Mom’s dresser drawers. She pulled out items of clothing, laid them on the bed and said, “Take what you want.” We each made a pile of what we wanted to keep and started a Goodwill donation pile.

I spotted a blouse that mom frequently wore. A memory flashed through my mind of her wearing this top, smiling and getting into a car. Another memory flashed in my mind, her wearing the top while we were shopping. I put the blouse in my pile in the living room. (I keep it in one of my bottom dresser drawers, next to a sweater dad always used to wear.)

On mom’s dresser was an old, wooden, beaten-up box with a lift-off cover. She’d had the box for as long as I could remember. (It was small, only 8¾” x 6” x 2¾”.) The box had a strip of wood parquet design that ran all around the body of the box, inside and out. The parquet design carried over to the top and bottom of the cover. The cover’s handle is made of a flat piece of wood and is centered on the top.

This box has great significance for me. It reminds me of when I was a little girl and my family home was in Chicago, we were still a family unit, and not torn by divorce.

I picked up the old box and carried it out to the living room and put it with my small pile of keepsakes. Memories came flooding back to me. Growing up, Mom had a large vanity in her bedroom. It consisted of a large round mirror, four wooden drawers on each side, two shelves between the drawers, and a small chair. This wooden box was kept on the bottom shelf of the vanity. It was one of the few items we could touch, open and look through.

I remember various items she kept in there through the years. The items would change so it was fun to lift the lid and see what was new. Rosary beads, holy medals, funeral cards, and a small manicure set. After we moved to California, she kept Disneyland ride coupons, rubber banded together.

When I was talking to my sister the other day about the box, she said she didn’t know who had it or what had happened to it. I told her I had it and later sent her a photo. She too had memories of playing with the box.

I’ve kept the box in different places in my home. Not always in a prominent place — such as on a shelf in my bedroom.

In the last few weeks, my husband has been remodeling our master bedroom. Everything had to come out of the room and is now in various parts of the house. I discovered mom’s box on top of a pile of things I had placed for safekeeping. I emptied it, dusted it off, and took numerous photos from different angles.

My brother, George, has a piece of furniture that was in our family living room. My sister, Sharon, has a knick-knack that belonged to our maternal grandmother. I’m starting an inventory sheet on the various family keepsakes we each have from our family household. I want my children to know the provenance of each item and not just one day toss it away. The box has become a family heirloom. 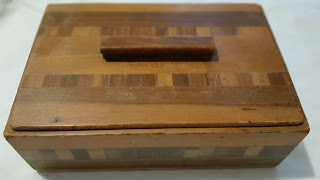 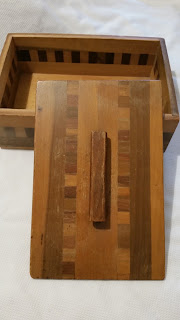 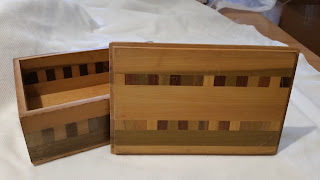 Posted by Gayle Ficarra Wolcott at 11:53 PM No comments:

I don’t have unusual names on my family tree. Nothing I could use in a search box to help distinguish from other names. I have George, Philip, Mary, Marie, Maria, Robert, Richard, Sharon, Angela, Angie, Angeline, Dorothy, Henry. I’m the only Gayle on the whole tree. Of course, it’s not spelled like everyone else. I usually get Gail or Gale written on my coffee cup order. No matter, it doesn’t bother me like it did when I was younger. Back then, I didn’t even like my name. I would fantasize a different name like…Amanda. Then I’d have a nickname like Mandy.

Looking through my RootsMagic database, I kept coming back to the name, George. It’s my father, brother and maternal great-grandfather’s name. No difference in spelling. Dad would sometimes shorten it as Geo. That’s the well-known abbreviation of George. I always liked the name for a boy or man.

I also like the name Jennie. It sounds old, but not ancient old. It was my maternal grandmother’s given name. Growing up we always called her grandma Jean. I didn’t know her real name until someone referred to her as Jennie. When she passed away, we all found out her middle name, Sylvia. My mother and aunt both claimed them never of it. Grandma is the only Jennie on my tree.

In 1978, my husband, David and I named our first born child, Jennifer. Her name is unique. She’s not named after anyone in particular. No other Jennifer on either side of her family tree. We had a hard time picking a girl’s name. At the time, we lived in a mobile home. I would shout different names down the long hallway to see how they sounded and if we liked them.

When Jennifer was in kindergarten, my husband David and I went to our first parent-teacher conference. While waiting for the teacher to get Jennifer’s file, we strolled around the room admiring all the student crayon drawings that were displayed along the top of the chalkboard. We were shown which one was Jennifer’s. When I saw she wrote her name as “Jennie,” I stopped and stood there with my mouth open, gaping . Seeing my grandma’s name written by my little girl left me dumb-struck, unable to speak. I guess I expected she would spelling it J-e-n-n-y.  I couldn’t get over she had chosen to spell it J-e-n-n-i-e without me telling her about her great-grandma. I felt like my grandma had reached down and squeezed my shoulder, giving her approval. I think I smiled all the way through the parent-teacher conference, and give Jennifer a special hug when we got home. 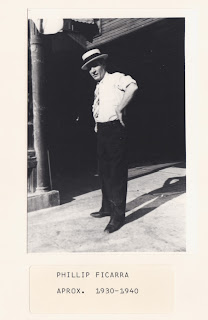