In genealogy circles, the term “Happy Dance” can mean Jackpot!, your research has paid-off big time! You found that elusive brother, sister, parent, cousin, grandparent, great-grandparent, (you fill in the blank) that you've been searching for that it makes you jump-for-joy, dance around the room, shout-out-loud, have a “zing” in your step and you can't stop smiling.


I was on Facebook the other day and came across a post, don't remember from who, that asked the question, “When did you have your last happy dance?”


With a smile on my face, I immediately clicked in the comments section and typed, “Last month!”

In the summer of 2012, my husband and I were on a cross-country road trip that brought us to New Orleans, Louisiana. A cousin in Chicago put me in touch with a collateral cousin of our family who lived in Metairie, Louisiana, his name is Philip Ficarra. I had never met him, only talked on the phone briefly a few weeks before we came. He was so glad to meet us and we felt the same toward him. Our talk turned to family stories and of course, our family's genealogy.


With the help of the family group sheets I brought, I figured out that his great-grandfather Salvadore, was the oldest brother of my grandfather Philip. Oh wow! One of my brick walls had just tumbled down! I knew there were cousins' in New Orleans, we just never met them. They in turn had heard of a branch of the family who moved to California. That was us!


Philip introduced us to his lovely mother Marguerite. Her husband had passed away but she was happy to fill me in on their branch of the family. As my husband and Philip talked cars, Marguerite and I swapped stories. Family talk eventually turned to a different branch of their family, the branch that had the “black sheep.” Philip's cousin Frank, had been murdered a long time ago. I sat up straighter in my chair. “WHAT??”


Marguerite said, “Frank had been shot in the back of his head. He had been messing around with a married woman, the husband came home, caught them, and Frank was shot.”


That story stayed with me for two years. I always wanted to see if I could find the newspaper article about the shooting and see if the details matched what Marguerite told to me.


Last month I renewed my subscription to GenealogyBank.com, a web site that has digitized historical newspapers, documents, and genealogy records. In the search box for the collection Newspaper Archives I typed: Ficarra. In the Date Range search box I typed: 1900 to 1940, then clicked on the Begin Search button. The results: 105 Ficarra Records.


I thought, “Well, not too bad. I can go through them slowly, see what I can find.”


Search result number 56 was an article on page two dated Monday, November 17, 1930, from the newspaper Times-Picayune in New Orleans. I clicked on the link and was taken to the article. It was the obituary for Frank Ficarra! Further searching brought up an article on page one of the same newspaper, same date: “Mysterious Killing of Former Convict Is Puzzle to Police.” “Brother-in-Law Held After Family Affray; Seven Bullets Supposedly Fired from Six-Shooter.” “Third Revolver Found Discharged.” “Frank Ficarro Killed With Own Pistol by John Occhipinti After Beating Wife, Witnesses Say.”


I read, then re-read the article two or three times. I later found two similar articles in a Baton Rouge, Louisiana newspaper. Frank wasn't killed by a jealous husband as Marguerite said.


The following is an excerpt from the newspaper article.

Mrs. Ficarro said she and her son were asleep when her husband came home about 6:30 on Sunday morning. She said her husband came into her bedroom and awakened her, asserting that he was tired of living there and wanted her to move with him somewhere else. She said he demanded that she get up and put on her clothes.

Fearing that she might be beaten unless she complied to his commands, Mrs. Ficarro told the police that she got out of bed. She said a minute or two later she refused to go with him and jumped back into bed. When she did, Ficarro, holding a revolver in one hand, began to beat her over the head with his fist.


Occhipinti is said to have told Ficarro to stop beating his wife, adding that “he did not want any more disturbance.” Ficarro, at that remark, is reported to have threatened to kill everyone in the house.


A moment later Ficarro, according to his wife, started running toward Occhipinti. “At that instant,” the dead man's wife said, “John grabbed the revolver from my husband's hand. When John took the gun, Frank quickly reached for his hip pocket to get another gun. When he did that John fired at him. I was so frightened. I don't remember how many shots were fired.” 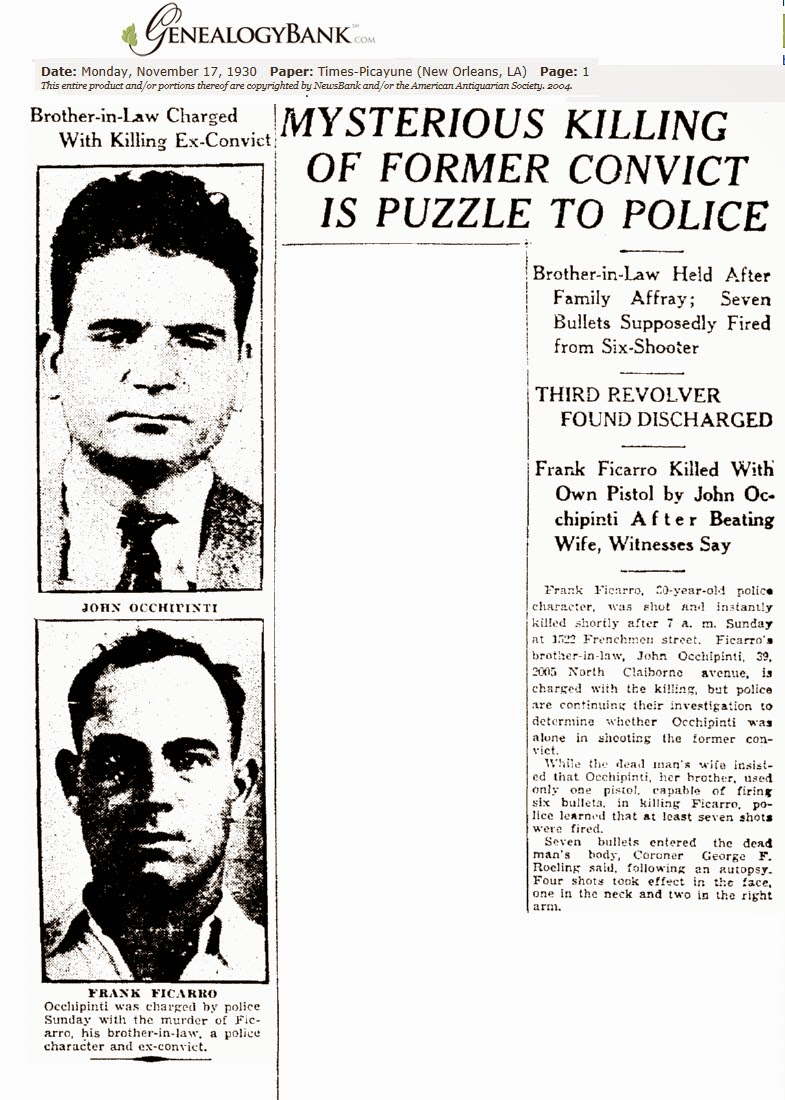 I found the details of a collateral cousin's murder. This was my Happy Dance!