Dave and I have been to Austin, TX once before.  Almost eight months ago in fact.  We helped move our daughter Lara and son-in-law Raymond here last February.  His company shut-down their California facility and moved to Austin.  They also asked Raymond to come too.  He loves his job so they made the move.  Lara found a new job the very next month and also loves where she works.
Lara and Raymond bought a house in July so we became their very first guests.  What a lovely home they've made.  They made a list of things they needed help with when Dave got here.  The next day Dave and Raymond installed a dogie-door in a wall, they replaced some plugs with GFIs, moved some wall switches and a few other things I can't remember.

One of the days we were here they took us on a tour of their offices.  We were so impressed by how awesome their co-workers were and the atmosphere of where they worked.  Felt like we were touring Facebook Central or Microsoft!  Afterwards we went in search of where to view the Bats of Austin.  It was quite a sight to see! 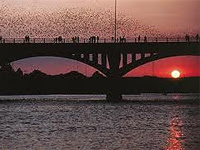 (I'm quoting an Austin Events page:)
Austin might not have any theme parks or large zoos, but America's largest urban bat colony has become the city's best-known (and ecologically correct) tourist attraction.  It all started in 1980, when the team of engineers designing the Congress Avenue bridge unknowingly created the crevices that would soon become the home to the largest urban bat colony in North America.  More than 1.5 million bats emerge each night at dusk, as they have for more than two decades, from the bridge's underbelly on food runs that blacken the otherwise red sky.

﻿ ﻿ We had a wonderful tour the LBJ Presidential Museum on the campus of the University of Texas.

In and around downtown Austin there is an art exhibit called CowParade.  (I'm quoting CowParade Wikipedia:)
CowParade is an international public art exhibit that has been featured in major world cities. Fiberglass sculptures of cows are decorated by local artists, and distributed over the city centre, in public places such as train stations, important avenues, and parks. They often feature artwork and designs specific to local culture, as well as city life and other relevant themes. After the exhibition in the city, which lasts many months, the cows are auctioned off and the proceeds donated to charity.

Lara and I had a great day together.  We had pedicures, went out to lunch and did some shopping.  One afternoon the four of us went to the Inner Space Caverns in nearby Georgetown.  Such fun we had.  Afterwards we had lunch at Joe's Crab Shack, yum!

Dave and I have had such a wonderful and relaxing time here.  We had fun, togetherness and work, but we wouldn't have traded it for anything.  Bye Austin, hope to be back soon.
Posted by Gayle Ficarra Wolcott at 6:49 AM